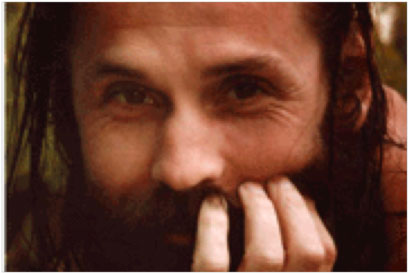 The Gyrotonic Expansion System® was created by Romanian-born Hungarian Juliu Horvath. Juliu Horvath was born in 1942 in Temesvar, Romania. His love for movement was apparent from the time he was a small child. During his youth he excelled at swimming, gymnastics and rowing. He began to study dance when he was 19, and by the time he was 21, was a principle dancer for the Romanian National Ballet Company. While on tour in Italy in 1970, he defected from Romania. He subsequently lived in a refugee camp in Italy for six months. After receiving political asylum in the United States, he moved to New York City. After arriving in New York, Juliu did whatever he needed to do in order to survive, from painting houses to dancing on cars in Central Park.

During this time he also began to audition for dance positions, and he performed in civic ballets. During the 1970’s, Juliu danced with the New York City Opera and was a guest artist at Radio City Music Hall. He also danced for a special tour company with international stars such as Margot Fonteyn, Jacques d’ Amboise and Melissa Hayden. Eventually he secured a position as principal dancer with the Houston Ballet. While with the Houston Ballet, Juliu ruptured his Achilles tendon, bringing his dancing career to a sudden halt. After this injury, Juliu moved back to New York City for a short time, where he began a regular yoga practice. As he got deeper into his movement and meditation practices, he began having profound energetic experiences. In an effort to learn more about these experiences, he moved to the island of St. Thomas in the Virgin Islands in 1977. There he built a small, one-room hut in the mountains and spent the next six years studying yoga and meditation. During this time he gained new insights into movement and healing, and from these insights he began to create his own unique exercise method. Juliu returned to New York City after his stay on St.Thomas.

Thomas, and in the early 1980’s he began teaching a new movement system that was based on what he had learned in St. Thomas. He called this system “Yoga for Dancers”. Initially “Yoga for Dancers” was taught at Steps on Broadway and at Juliu’s own location- White Cloud Studio. In the beginning, most of Juliu’s students were professional dancers. As demand for his classes grew, and the diversity of his clientele increased, Juliu refined Yoga for Dancers, creating a class format that almost any person could perform, regardless of age or state of health. He named this refined version of Yoga for Dancers ‘the GYROKINESIS® Method’. The original Yoga for Dancers movements are still taught as part of the Gyrokinesis Level 2 Program. At White Cloud Studio, Juliu continued to develop and refine the method he created on St. Thomas. It was here where he began to develop the Gyrotonic® Method, and his world-renowned Gyrotonic equipment. The Gyrotonic® and Gyrokinesis® methods quickly gained an international following, becoming popular in Europe, Asia, and Australia, as well as in the USA. The Gyrotonic Expansion System® has now grown to encompass over 7800 Trainers in 52 countries. Juliu continues to create new programming for the Gyrotonic® and Gyrokinesis® methods. He also conducts teacher training courses internationally and continues develop new Gyrotonic® equipment, and refine existing equipment designs. He is always developing a more common sense approach to health and wellbeing, as he puts it, in a “seriously un-serious way”. (Courtesy of the Gyrotonic.com (website) 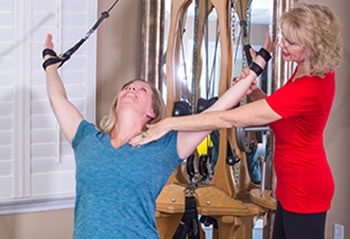 Gyrotonic® methodology allows users to stretch and strengthen muscles, while simultaneously stimulating and strengthening connective tissues in and around the joints of the body. These exercises are synchronized with corresponding breathing patterns, thus enhancing aerobic and cardiovascular stimulation and promoting neuro-muscular rejuvenation.

Gyrotonic® exercises offer complete freedom of movement. Exercises are performed on the Professional Pulley Tower. The system is fully adjustable and can meet the needs of many people with varying body types and levels of strength. Even and constant resistance in the handle unit and pulley tower, (through the triple reduction in the pulleys), completely eliminates the jarring, which takes place at the beginning and end of exercises performed on conventional exercise equipment; this is typically when many injuries occur. The circular, spiraling and undulating movements which characterize the Gyrotonic Expansion System® help to increase the functional capacity of the spine, contributing to a spherical and three-dimensional awareness, resulting in increased equilibrium.

Gyrokenesis® exercises allow one to work on the entire body through seven natural elements of spinal movement: forward, backward, left side, right side, left twist, right twist and circular, as well as all other joint articulations. This approach systematically and gently works the joints and muscles through rhythmic and undulating movements. These movements stimulate the body’s internal organs while different corresponding breathing patterns are integrated along with the movements.

Fluidity is the key. Postures are not held for long periods of time. Instead, postures are smoothly and harmoniously connected through the use of breath, making exercises appear and feel more like a dance and swimming than like traditional yoga.

A typical Gyrokenesis® class begins with participants practicing self-massage and simple breathing patterns, something Juliu Horvath has named, “Awakening of the Senses.” Then the spine and pelvis are engaged through simple exercises: while seated on low stools, participants mobilize the spine through a series of arching, curling, bending, twisting and spiraling movements. These same movement patterns are expanded to release the hip, knee, hamstring, quadriceps and so on, in all possible directions: front, back, twisting and turning. The corresponding breathing patterns executed during every movement stimulate the nervous system, open up the energy pathways and oxygenate the blood. The more advanced classes offer endurance training to participants prepared for more strenuous activities. All Gyrokenesis® classes, from beginner to advanced, encompass not only sitting but also lying and standing positions.

Those who practice Gyrokenesis® exercises tend to be more relaxed in their daily lives and can move with increased flexibility and ease.

Prices are the same as for Pilates Private Sessions and Classes

GYROKENISIS is practiced on a mat and chair, without equipment. It is a movement method that addresses the entire body, opening energy pathways, stimulating the nervous system, increasing range of motion, and creating functional strength through smooth, rhythmic, flowing movement sequences. It is an original and unique method, which coordinates movement, breath and mental focus.